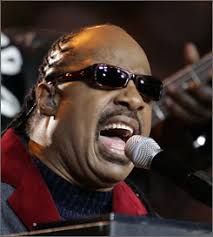 I was thrilled recently to have the once in a lifetime experience to see the last living music genius Stevie Wonder live in concert as part of his Autumn Night tour. Stevie, a master musician, moved from one song to another at whim, leading his band with the shake of his hand, improvising at will, and singing with unmatched skill and ferocious fervour.

The most admirable characteristic of Stevie is that of his INTENTION. “Intention is not something you do,” says Wayne Dyer, “but rather a force that exists in the universe as an invisible field of energy—a power that can carry us.” He is driven not by a need to be revered, but by a basic desire to further love and peace, that is itself reflected not only in his music but in the way it is delivered in his songs and in his singing. Every phrase of his songs are sung with wild passionate abandon and none are ever sung the same way twice; the mark of a true artistic singer.

Stevie Wonder has worked closely with Speech Level Singing originator Seth Riggs since almost the beginning of his career, and he has been his only teacher. Perhaps because of this, Stevie sings consistently with a great, strong chest, mix and head voice, with no difficulties in singing anywhere in his range. He sung for nearly 3 hours that night, and would have gladly continued had he not been instructed to end the show. Even though it’s evident in his slightly bulging neck muscles that he was really going overdrive with his voice, he did so using a mix, the magical key which continues to give him an otherwise impossible vocal endurance to outlast the longest concerts, and the most grueling of tours.

All of this makes Stevie Wonder a vocalist exemplary of Speech Level Singing, and perhaps the last living music genius.

Not sure which Toronto music school to choose? Find out which music school is right for your child.
VIEW SCHOOL COMPARISON

Check out our new posts below!

The Singers Toolbox For Beginners

How To Understand What Is Unique About Your Own Voice Part 2: Riffs and Phrasing

How To Understand What Is Unique About Your Own Voice Part 1: Tone and Timbre